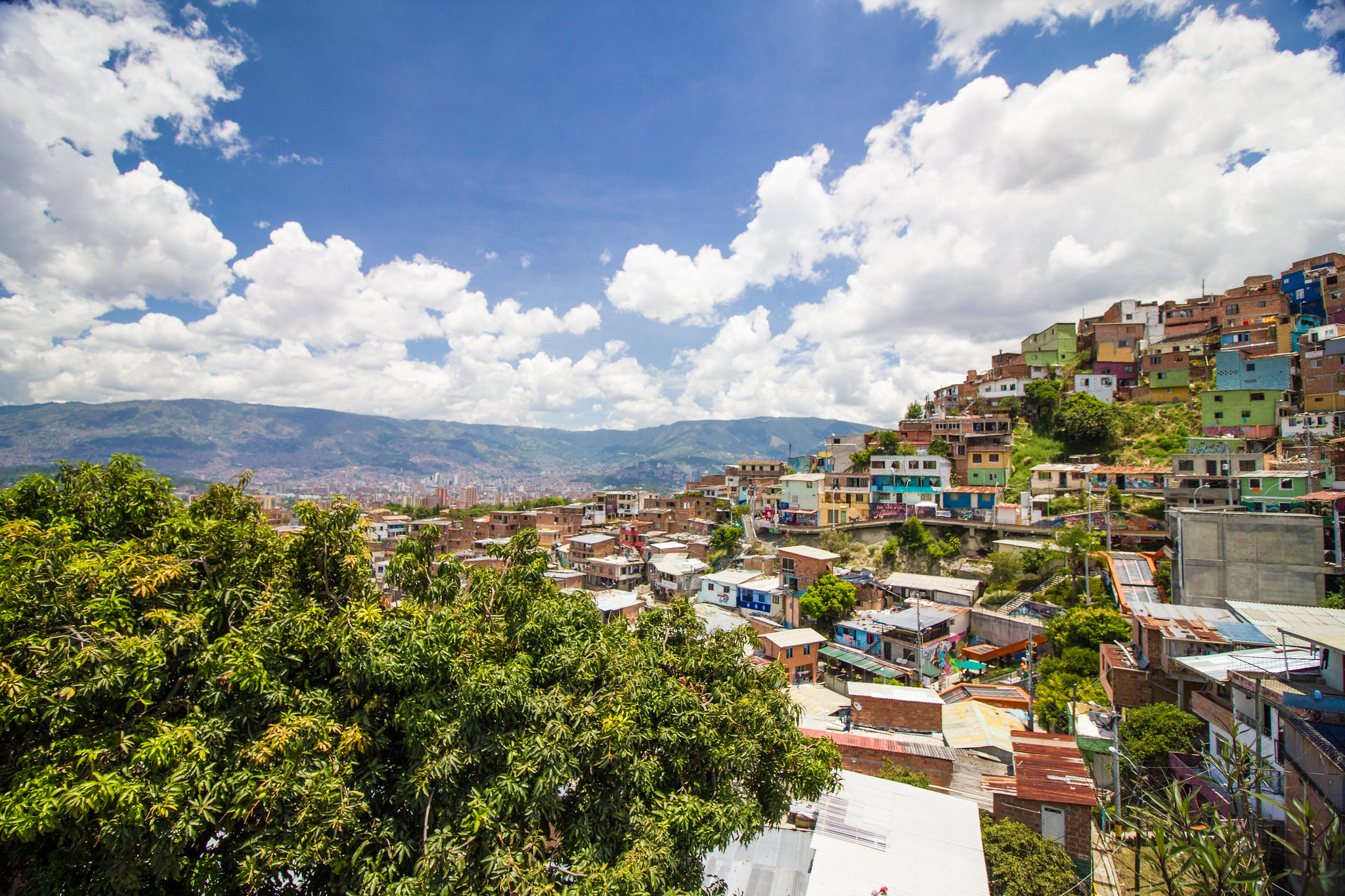 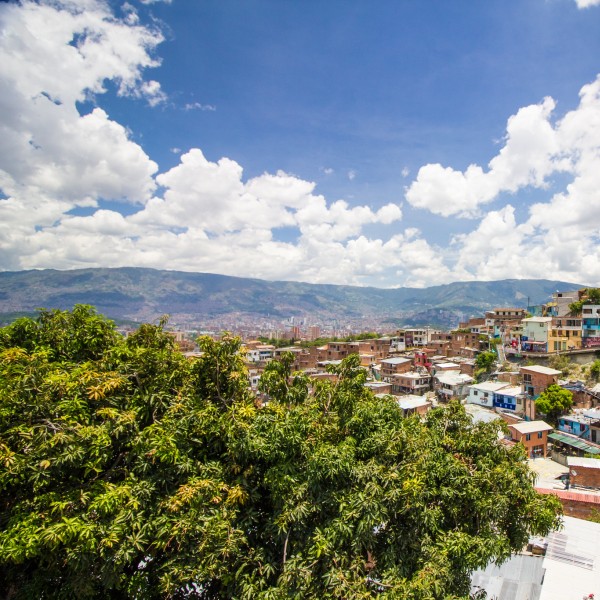 Comuna 13 in Medellín - A history of resilience

The Comuna 13 of Medellin is a true story of resilience. Read this post and learn how locals rebuilt their community through art, culture, music, and innovation.

When the army and the guerillas were fighting in the neighborhood, a bullet went through the wall of a house and through the arm of a five-year-old boy. His grandmother found him, wrapped his arm up, and in a desperate intent to save him crossed the gunfire waving a white flag.

This is the story that will open your tour through the Comuna 13 in Medellín. A story that will pull you into the lives of the people that grew up in this area. This was once one of the most dangerous neighborhoods of Medellín and, with a lot of strength and hard work, the people there have managed to turn their future around and create a better life.

View over the neighborhood

Comuna 13 then and now

In the past, the locals led a life dominated by violence, drug traffic, and criminal activities. It was everything but safe. The situation got even worse when FARC guerilla fighters located their 47th block in the comuna and made it a scene for the conflict between them and the government. “We got caught in a fight that wasn’t ours” says Lady who grew up in the neighborhood and lived through those difficult times.

Pay a visit to Comuna 13 today and you will barely be able to notice any signs of this past at the first sight. Passing by the football field you may be able to watch some of the teenagers play opposite of the little fruit shop. Further up the street Doña Alba and her team sell delicious homemade ice cream to refresh their customers on sunny days. People are greeting each other like old friends walking down the street.

Comuna 13 is a quiet place today

The neighborhood is a place of flourishing culture, of art, music, sport, and dancing. Something that nobody would have imagined a few years back. The history of Comuna 13 is one of resilience, of the dream of the people to make their home a better one, a safer one. The children who lived through the violence of the past have made an effort to create a home and turn around their future. Today, as adults, they can celebrate the success of making their vision come to life. These streets are now some of the most tranquil and beautiful ones in Medellín. This transformation is nowadays attracting many travelers that come to the comuna to admire the beautiful graffiti and hear the local’s history.

Taking a tour of Comuna 13 you will always be accompanied by one of the people that lived the difficult past, they will tell you their very personal history. This is why the tours always turn out different - they are given from another perspective every time. So, in spite of having become really popular among tourists a tour of Comuna 13 will never feel generic.

When your guide leads you through the streets of the comuna, you will take an imaginary walk through the history of the place. There is barely any wall that isn’t painted with colorful graffiti or graffitis which make up a big puzzle of tales of the past.

Starting at the entrance of the area, you will hear the story of the governmental operation Mariscal directed at banishing the guerillas from the area. This day resulted in a tragedy for many people like the grandma and her little grandson that had to fight for their life.

Passing by Doña Alba’s ice cream shop, you’ll reach the electric escalators. These were built in 2012 and made the steep hills of the neighborhood much more accessible. Slowly making your way upwards on the escalators many paintings and little houses constructed in a peculiar, inclined shape to fit into the hills, will pass by.

The electric escalators have made the Comuna much more accessible

On the first platform a large and colorful mural covers the whole wall. It tells the story of the second governmental operation, called Orion, only five months after the neighborhood was hit by the brutal fights of operation Mariscal. People felt like the government was gambling with their lives but they never lost hope and were inspired through the strength of their community.

Left: Mother earth’s grey face is crying over the tragedies in the neighborhood but the green in her eye symbolizes hope
Right: The government represented by the hand throws the homes of the people around like dices, gambling with their lives

At the very top of the electric escalators, you’ll find Black & White 13. A place where breakdance talents show off their abilities to perform risky dance moves and jumps to hip hop music. In the mornings, you’ll be able to watch them warm up with some flowing moves and casually throw kisses to their friends walking by. People are like one big family here. Next to this cultural hub, you’ll also find the first viewpoint with an incredible look at the comuna and the famous electric escalators.

A little further up the hill, you will encounter a graffiti of a child, showing off its biceps. This is a depiction of the strength of the children in Comuna 13. They decided to stay in the neighborhood in spite of all the horrible things they have been through. The graffiti also refers to the determination and resilience that the children have shown in rebuilding their home and making it a great place to live.

On one of the last stops of the tour, you will take a moment to admire a mural that stands for the Comuna 13 of today. The face of mother earth, previously depicted in grey for the hard times the people have been through is now of soft color. While the violence and criminality had Comuna 13 separated from the city for a long time, her face is now connected with the rest of the Medellín. The positive development that the community has experienced over the last years made the comuna an important part of the city.

Just like you are a part of Comuna 13 as soon as you visit. Of course, the most important part of their recovery was the determination of the people. However, they know and don’t get tired to explain that the visitors and their contribution are just as essential to the transformation of the Comuna.

After your tour, you shouldn’t miss out on paying a visit to the art gallery and café of Chota - one of the most important artists in the neighborhood. You can have a cool coffee lemonade while reflecting upon the impressive stories you have heard and the meaningful graffiti art you have seen.

The walls of Comuna 13 are regularly painted with more colorful art and most recently they are targeting new topics as well. At the entrance of the comuna you will find a painting that was a recent collaborative project by a Venezuelan and a Colombian artist and deals with the issue of the migration waves from Venezuela.

A visit to Medellín should always include a visit to Comuna 13. Not only to support the project but also to take away an important lesson for yourself. With a lot of resilience, strength, and overall unity it is possible to reach just about anything.